The Small Guys Festival is rockin’ it out with the Garagistes!

We had so much fun the first time we're doing it again - !

You’ve heard of the little gems, the boutique wineries, the cult followings and the maverick winemakers, but they are often hard to find or to get to. Now we showcase the small case lot artisan wines commercially produced–all gathered in one spot. What’s a garagiste (GAR-aH-jeest )? — It’s a label coined in France to indicate those who stepped outside the lines and broke the rules, taking risks and making small case lots or micro cuvees in their ‘garage’. We think you’ll agree that some interesting things are happening at the front edge of winemaking with these passionate winemakers and growers.

Kelowna August 18th 2-4:40  PM  The Small Producers Festival will be in Kelowna.

These events are organized by Garagiste North. It was born out of many conversations with small producers who are faced with the difficult realites of getting their wines to the public, and wine lovers who are always looking for those interesting and unique producers but often have difficulty finding them. It seemed like a perfect solution, and a great way to spend an afternoon or evening.

The Latest from the Garagistes!

The Hottest Year in Over a Century

This has been the craziest year yet in Okanagan/Garagiste wine country. Our garagistes have been kept hopping all summer with record early ripening and harvests beginning in early AUGUST – the first harvest in the Okanagan was at Garagiste Bella Wines. Some say this will be the vintage of the century and others, like Wendy Rose from Bella further comment that “we will definitely be talking about this vintage for a century!”

Garagistes are revving up for the 3rd wine festival happening this Sunday, September 27th in Kelowna at the Laurel Packinghouse. Ticket sales have ramped up since the incredible exposure in the London Financial Times Magazine who named the Garagiste North Festival as one of the Top Five Festivals in the World! This news draws international eyes to our unique concept festival as well as onto our passionate Garagiste winemakers.  Here's the article below: 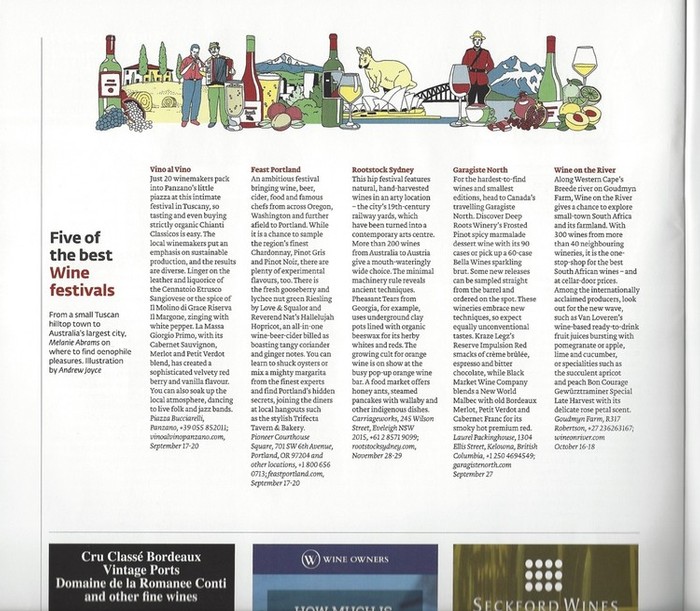 Stay tuned for further news and details on harrowing winemaker heart-stopping moments on this dramatic season: As the Barrel Turns. We will also be announcing the 2016 Garagiste wines that are sure to get palates wagging.

So Much Fun--Let's Do it Again! 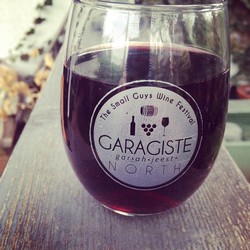 They came, the drank, they tasted and they left.  And if you missed it, check out these great articles to give you a feel for the event:  We're doing it again in Kelowna, September 27th, come join the party!

Who are the ‘small guys’ of the BC wine world? They are several small, wineries, both physical and virtual, which are very specialized and thus produce what’s called ‘small lots’ or under 2000 cases of wine per year. These small artisan producers are modeled on the ‘garagiste’ winemakers of France, who gained attention producing impressive wines in their garages.

Some have been around for a while, while others only have a few vintages under their belts. With the help of Terry Meyer Stone and Jennifer Schell, twenty wineries came together last year under the banner ‘Garagiste North’ to have a venue to showcase their wines and gain public recognition. Their first wine festival was held last September in Okanagan Falls and it was a great success; one of the best I’ve attended. It was a beautiful day and the venue, food and entertainment were all top notch. The very best part, though, were the wines. So you can imagine how excited people were when they decided to bring this event to Vancouver last month...(read more)

What is a garagiste? (gar-ah-jeest).  It started out in France (of course) where it was a derogatory phrase for those avante garde and crazy mavericks making wine in their garage and outside the highly regulated system. Gradually and grudgingly came the acknowledgement that something really interesting was happening with these small case lot artisan wines, and a movement was born.

Couldn’t fit everyone in but we are committed to bringing you all these stories over the course of the year.

They are all driven, passionate winemakers who qualify by producing under 2000 cases a year and use only BC Fruit.

Small they may be but these wineries have an effect on the future of BC wines.

They take the time and commitment to grow different varietals, use experimental methods and take chances in the cellar that few others would or could. When you find one you like it’s best to buy and hold because all productions are... (read more and listen to the interviews)

Want to stay in touch with the latest news?  Sign up now and get your APB on the Garagistes!